Welcome back to the second part of our journey into the guts of radare2! In this part we’ll cover more of the features of radare2, this time with the focus on binary exploitation.

A lot of you waited for the second part, so here it is! Hope to publish the next part faster, much faster. If you didn’t read the first part of the series I highly recommend you to do so. It describes the basics of radare2 and explains many of the commands that I’ll use here.

In this part of the series we’ll focus on exploiting a simple binary. radare2 has many features which will help us in exploitation, such as mitigation detection, ROP gadget searching, random patterns generation, register telescoping and more. You can find a Reference Sheet at the end of this post. Today I’ll show you some of these great features and together we’ll use radare2 to bypass nx protected binary on an ASLR enabled system. I assume that you are already familiar with the following prerequisites:

It’s really important to be familiar with these topics because I won’t get deep into them, or even won’t briefly explain some of them. 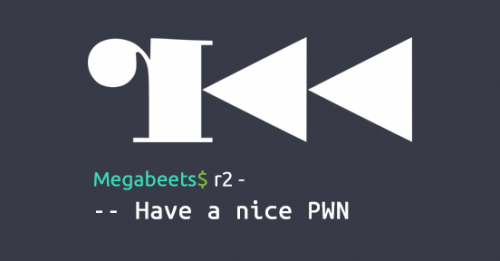 First of all, let’s update radare2 to its newest git version:

We have a long journey ahead so while we’re waiting for the update to finish, let’s get some motivation boost — cute cats video!

Getting familiar with our binary

You can download the binary from here, and the source from here.
If you want to compile the source by yourself, use the following command:

Our binary this time is quite similar to the one from the previous post with a few slight changes to the main() function:

This was the previous main():

The functionality of the binary is pretty simple and we went through it in the previous post — It asks for user input, performs rot13 on the input and compares it with the result of rot13 on the string “Megabeets”. Id est, the input should be ‘Zrtnorrgf’.

It’s all well and good but today our post is not about cracking a simple Crackme but about exploiting it. Wooho! Let’s get to the work.

The second part of “A journey into #radare2” is finally out – and this time: Exploitation! Check it out @ https://t.co/sKH1YhxJwK@radareorg

As with every exploitation challenge, it is always a good habit to check the binary for implemented security protections. We can do it with rabin2 which I demonstrated in the last post or simply by executing i from inside radare’s shell. Because we haven’t opened the binary with radare yet, we’ll go for the rabin2 method:

As you can see in the marked lines, the binary is NX protected which means that we won’t have an executable stack to rely on. Moreover, the file isn’t protected with canaries , pic  or relro.

END_OF_DOCUMENT_TOKEN_TO_BE_REPLACED

A lot has changed since I wrote this tutorial, both with radare2 and with me. I am now, for several years, a core member in the radare2 team and a maintainer of Cutter, a modern, GUI-based, reverse engineering framework that is powered by radare2.

This is an updated version of the original tutorial. I will keep it updated every now and then to make sure it is up-to-date with the changes in radare2.

I was playing a lot with radare2 in the past years, ever since I began participating in CTFs and got deeper into RE and exploitation challenges. I found radare2 very helpful with many CTFs tasks and my solutions had shortened significantly. It’s also my go-to tool for malware analysis tasks such as configuration retrievals. Sadly, I believe that only few people are familiar with radare2. It might be because they’re afraid to break out of their comfort zone (IDA Pro, x64dbg, Ghidra, OllyDBG, gdb) or they have simply not heard of it. Either way, I honestly believe that you must include radare2 in your toolbox.

Because I got really enthusiastic about the project and I want more and more researchers to be familiar with it, use it and hopefully contribute to the project, I decided to create a series of articles and use-cases of r2. Since these articles aim to teach you the basics of radare2, its features, and capabilities, I’ll explain much more than you actually need to know in order to solve each task.

radare2 is an open-source framework for reverse engineering and binary analysis which implements a rich command-line interface for disassembling, analyzing data, patching binaries, comparing data, searching, replacing, visualizing and more. It has great scripting capabilities, it runs on all major platforms (GNU/Linux, Windows, *BSD, iOS, OSX, Solaris…) and it supports tons of architectures and file formats. But maybe above all of its features stands the ideology – radare2 is absolutely free.

This framework is composed of a set of utilities that can be used either together from r2 shell or independently – We’ll get familiar with tools such as rahash2, rabin2 and ragg2. Together they create one of the most powerful toolsets in the field of static and dynamic analysis, hex editing and exploitation (in the following articles I’ll dive deeper into developing exploits using radare2).

It is important to note that r2’s learning curve is pretty steep – although it has an amazing GUI called Cutter, which I co-maintain, it is still young to compete with more mature RE applications such as IDA or Ghidra. The CLI, however, including its Visual Mode, is still the core of radare2 and where its power lays. Because of its complexity, I’ll try to make things as clear and simple as I can.

If you don’t want to install the git version or you want the binaries for another machine (Windows, OS X, iOS, etc) download the release from github.